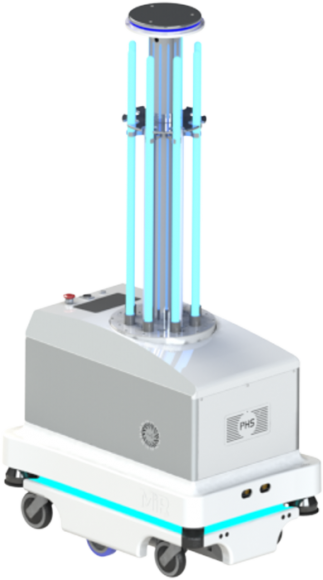 next to you, protecting your health

Raybotics designs and manufactures PHS intelligent robots.
3 models, one solution: safe surface and air disinfection that automatically removes up to 99.9% of viruses, bacteria, germs and molds.

PHS robots are a disinfection system using UV-C lamps in combination with ozone.

The combined action of UV-C and ozone, detected according to the characteristics of the environment, is able to destroy the DNA structures of microorganisms and quickly and safely eliminate harmful bacteria and viruses. 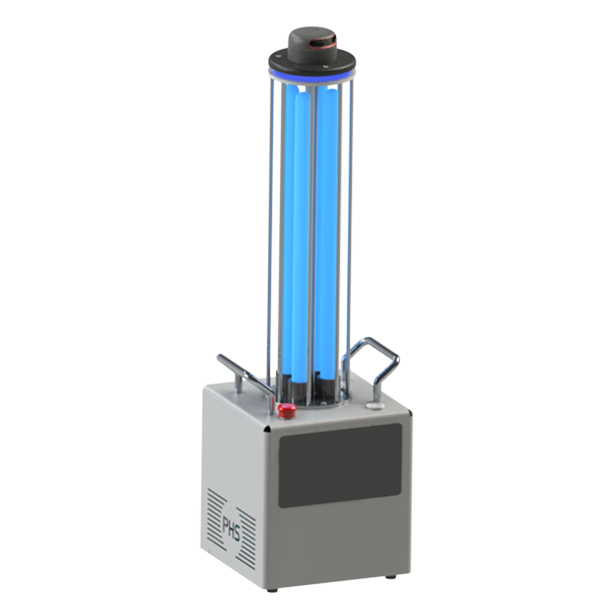 The smallest and most powerful UV-C disinfection system on the market. Due to its size, it is ideal for disinfection of ambulances, bathrooms, lockers, garages, 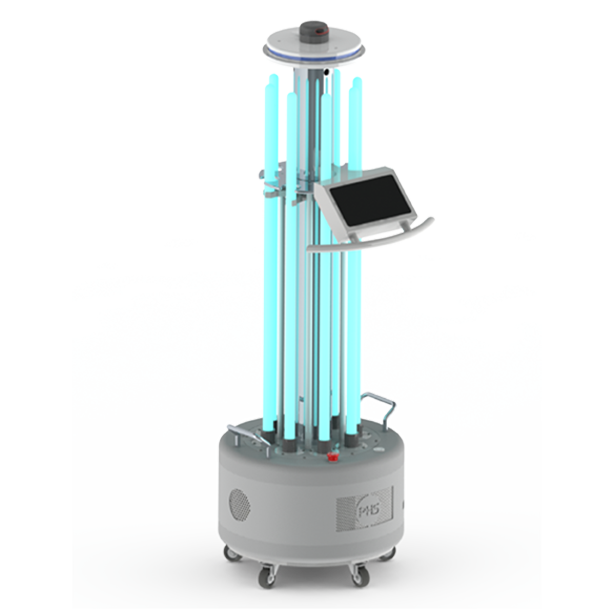 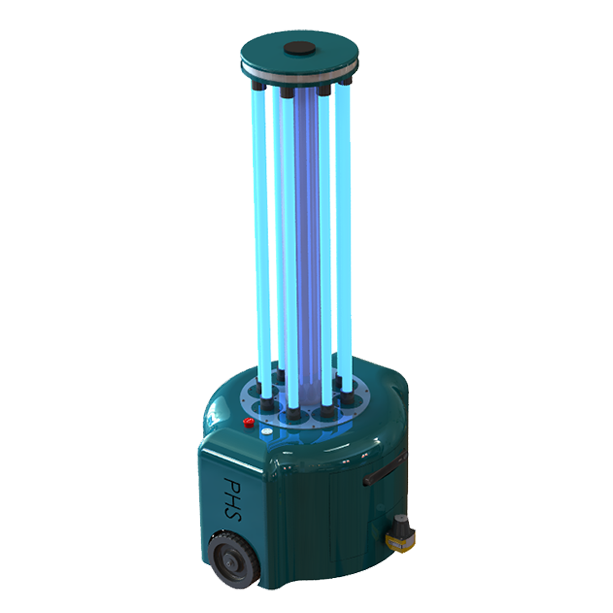 PHS-Agile It combines natural autonomous driving with the needs of use within conﬁned or difﬁcult-to-access spaces. It is intelligent and it totally removes the guesswork 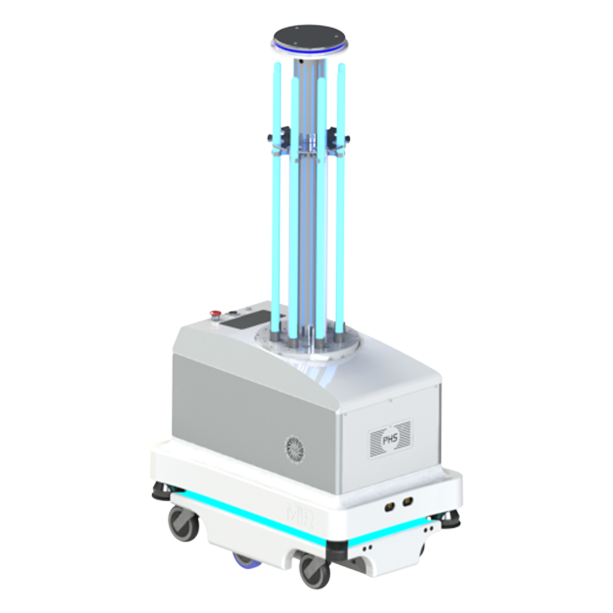 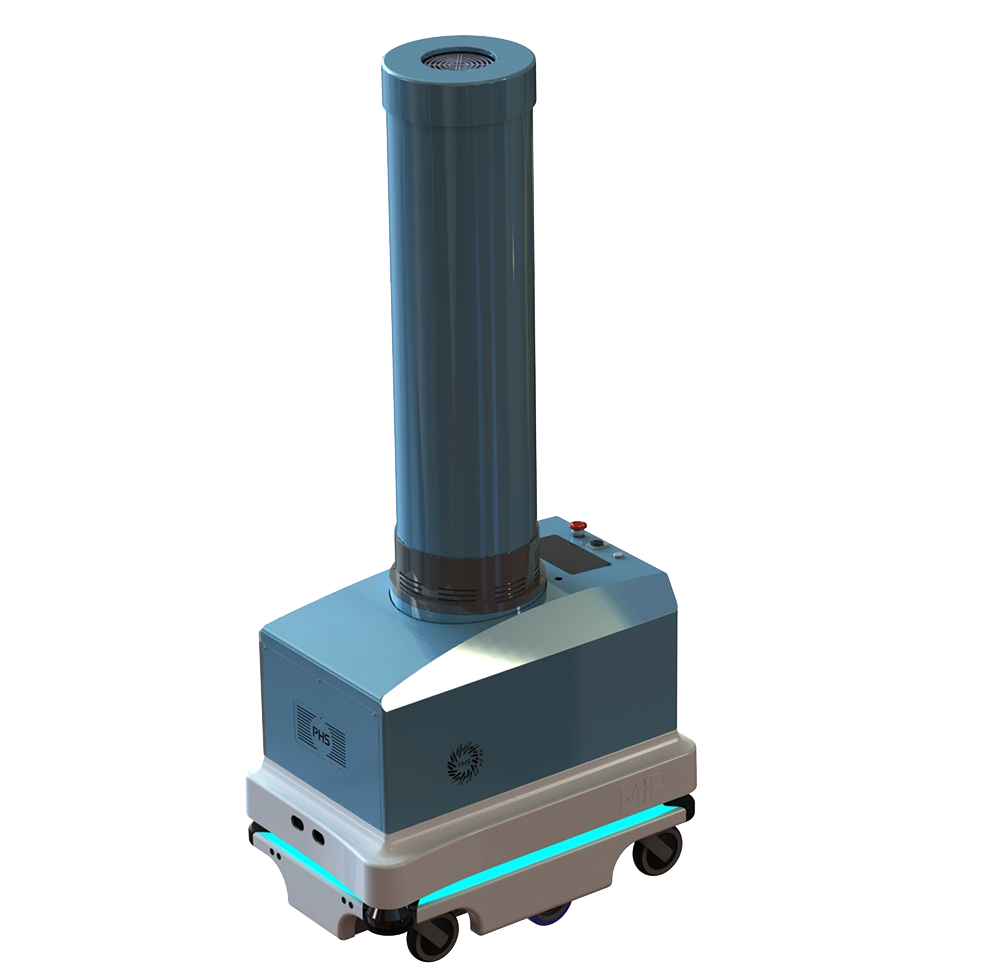 PHS models with integrated AIR module have an additional advantage: they can be used safely in the presence of people. 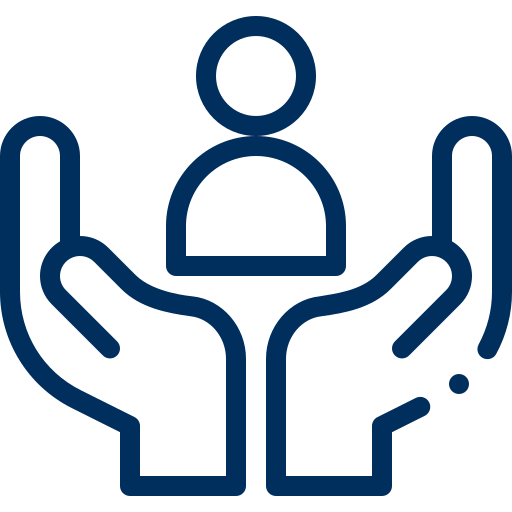 The RAYCARE+ support program consists of a service of technical support and specialized Raybotics assistance.

Thanks to the integrated sensors, the robots are able to acquire the surrounding environment and return an optimized disinfection plan in terms of number and position to be reached and cycle times.

Disinfection operations can be set to start immediately or delayed, as well as planned over time with recurring cycles. Robots can be controlled manually or remotely by Wi-Fi/web-app from tablets/smartphones.

Thanks to an automatic detection system (Moving Detection) Robots are able to intercept the presence of people, animals or objects during the disinfection cycles and interrupt their activity. Residual ozone is automatically eliminated at the end of treatment, allowing operators to safely enter after the cycle is completed.

Disinfection is chemical-free. The UV-C and 'Ozone Generating' technologies used in combination are physical processes that respect the environment.

End of cycle and reporting

After each disinfection cycle, reports of activities are automatically generated and they are saved in database to be externally shared.

Software and hardware can be customized according to customer's needs: from the color of the frame, which can be personalized in many versions, to the choice of integrating the company logo into the interface and reports.

The PHS system combines the effect of ultraviolet radiation with that of ozone diffusion.
Low-pressure UV-C devices with a ‘germicidal’ function use UV-C light to achieve rapid sterilization of bacteria, molds, fungi, viruses and microorganisms in both air and water.

UV-C provides rapid and effective inactivation of microorganisms. When bacteria, viruses and protozoa are exposed to the germicidal wavelengths of UV-C light, they are rendered incapable of reproducing and infecting Microorganisms are inactivated by UV-C light as a result of damage to nucleic acids.

Microorganisms cause issues in various places, in a clinical setting bacteria can cause dangerous outbreaks. Ozone can be used as a chemical disinfectant to kill bacteria and viruses with low ozone concentrations. The contact time is altered depending on the desired deactivation grade.

PHS-M8 is housed on an MIR, an autonomously guided robotic base. MIR Robot, equipped with a camera and sensors, is able to move autonomously within an environment after having acquired its configuration. It is able to avoid obstacles along its path and to interface with automatic devices such as lifts and automatic doors. Automation optimizes workflows, reducing personnel costs and eliminating the need to change the configuration of environments. This technology is optimal for large environments, such as hospitals, airports, shopping malls and the like. The robot's mission can be easily managed by an operator using a smartphone, tablet or computer connected to the network.

he 3 PHS systems are all equipped with a lithium battery, with variable autonomy depending on the model, which minimizes recharging times and maximizes the time spent on disinfection activities. The lithium-ion battery is an eco-friendly, low-maintenance accumulator, an advantage that most other devices cannot claim. There is no memory and no programmed cycle is required to extend battery life. In addition, self-discharge is less than half that of nickel-cadmium batteries. It is light and compact, with a high energy density used for a wide variety of products.

Low-pressure UV-C lamps use UV-C light to achieve rapid disinfection of air and water by destroying bacteria, molds, fungi, viruses and microorganisms. Around 40 per cent of the electricity is converted directly into UV-C radiation with monochromatic emission at 254 nm for germicidal applications. The integration of Ozone Generating lamps enables a combined UV-C + ozone action that maximizes the disinfectant action within the environment while also providing coverage of shaded areas.

The software automatically determines the size of the environment and calculates the duration of the disinfection cycle. It is operated by an easy-to-use touch screen, which guides an operator through the start of treatment. When the cycle is finished, the PHS automatically switches off and alerts the operator to the status of the disinfection process by generating a pdf report.

With regard to state aid, de Minimis aid, grants, subsidies, advantages, contributions or aid in cash or in kind, not of a general nature and devoid of nature, please refer to the contents of the transparency section of the National State Aid Register referred to in art. 52 of Law no. 234/2012 https://www.rna.gov.it/RegistroNazionaleTrasparenza/faces/pages/TrasparenzaAiuto.jspx”